How to do a manual Hyper-V failover

If you have a pair of Hyper-V "host" servers setup to replicate this allows you to do a manual fail-over to the "other" host server if one of the physical servers fails. Consider carefully if this is something that you might choose to do if you can't contact me for an extended period of time. It's not something you would hopefully ever need to do on your own without IT support, however, the instructions are below.

Note that, once this is done, leave the other server off and even unplugged, you *really* don’t want the old server coming back on again and conflicting with the "failed-over" servers.

Logon to the working physical host server where you would like to start-up the Hyper-V replica and open the Hyper-V management console.
You can see in the screenshot below there are two virtual machines on this host server, "PRINT" (see 1 below) which is a replica from the other server which you can see by the replication health (see 2 below) and is in the "Off" state which is the normal state of a replica. There is also an example machine that is running on this server called EXAMPLE .

We are going to ignore EXAMPLE and leave it on and just concentrate on starting up PRINT which is the replica from the failed server. (continued below) 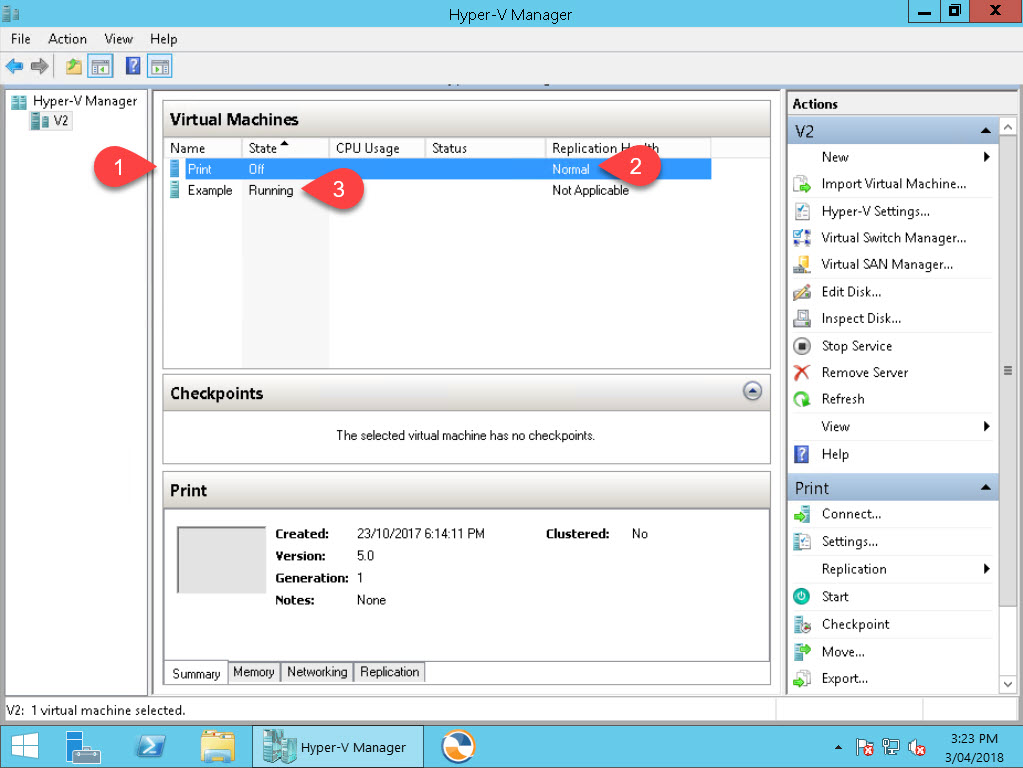 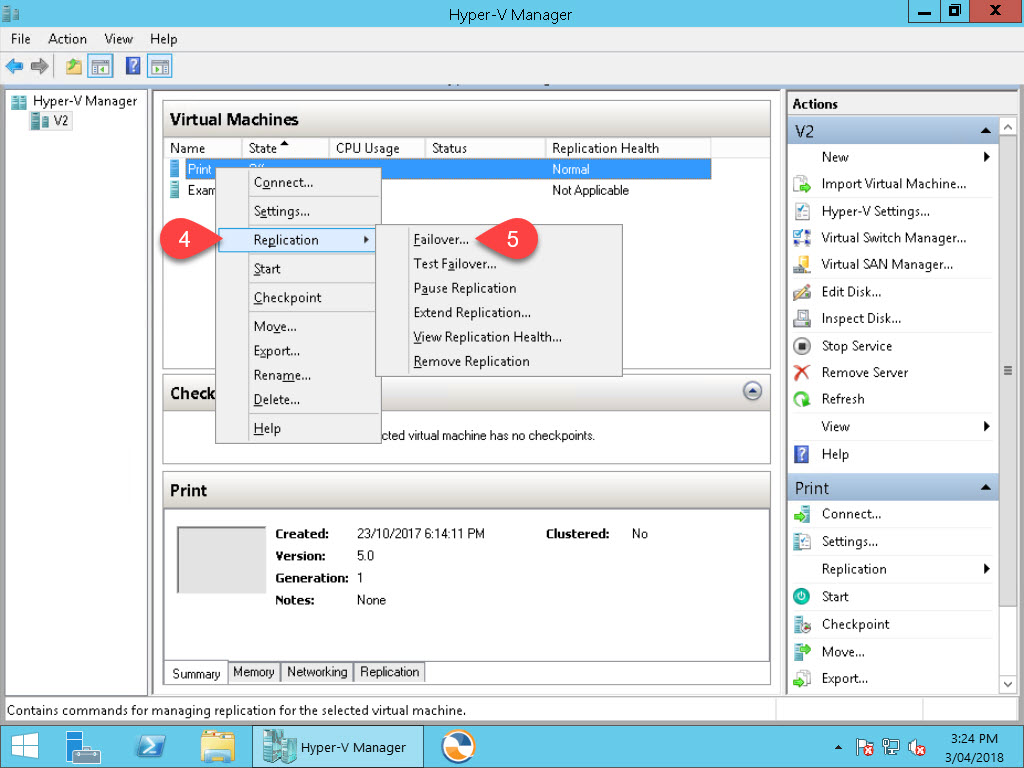 Read over the warning, check the date and time of the most recent recover point (to make sure that its recent). In this instance the failed server was set to replicate every 15 minutes but check just in case it hasn’t been working for some reason and this data is very old. Click fail-over (see 6 below)  (continued below) 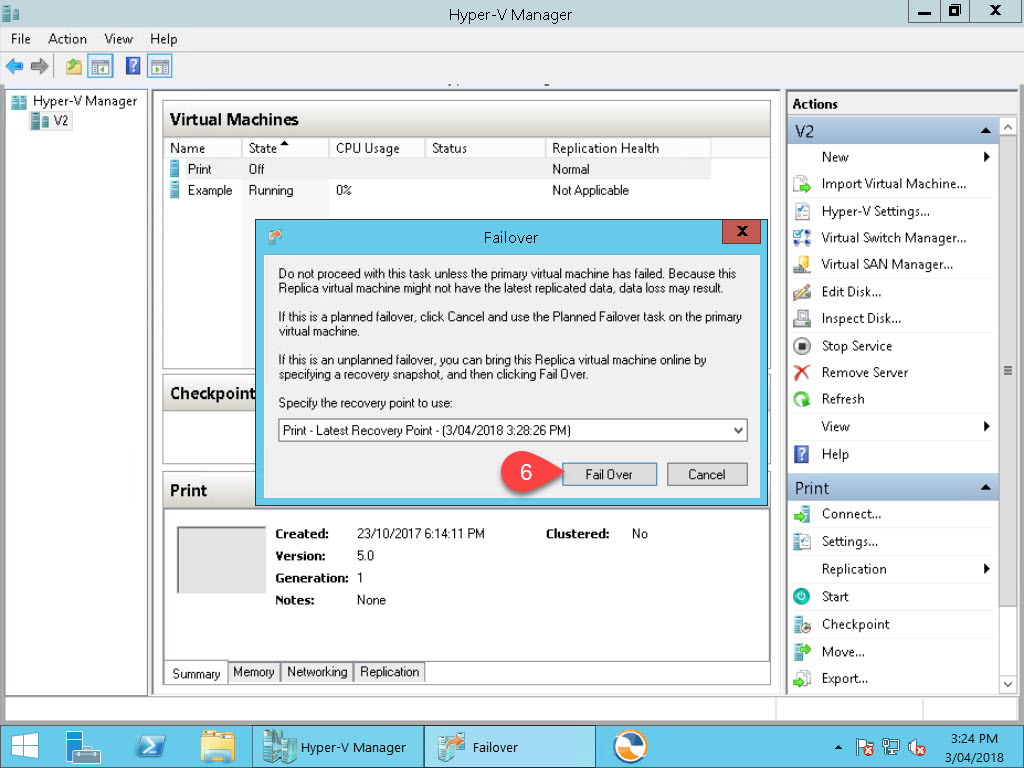 The replica will start and will be available shortly at the same network address and in all other respects should be exactly the same as before except that the data may be up to 15 minutes old. You can see now that PRINT is running (see 7 below) and it is starting up in the background (see 8 below)

Note that the other host server "EXAMPLE" is running still also. 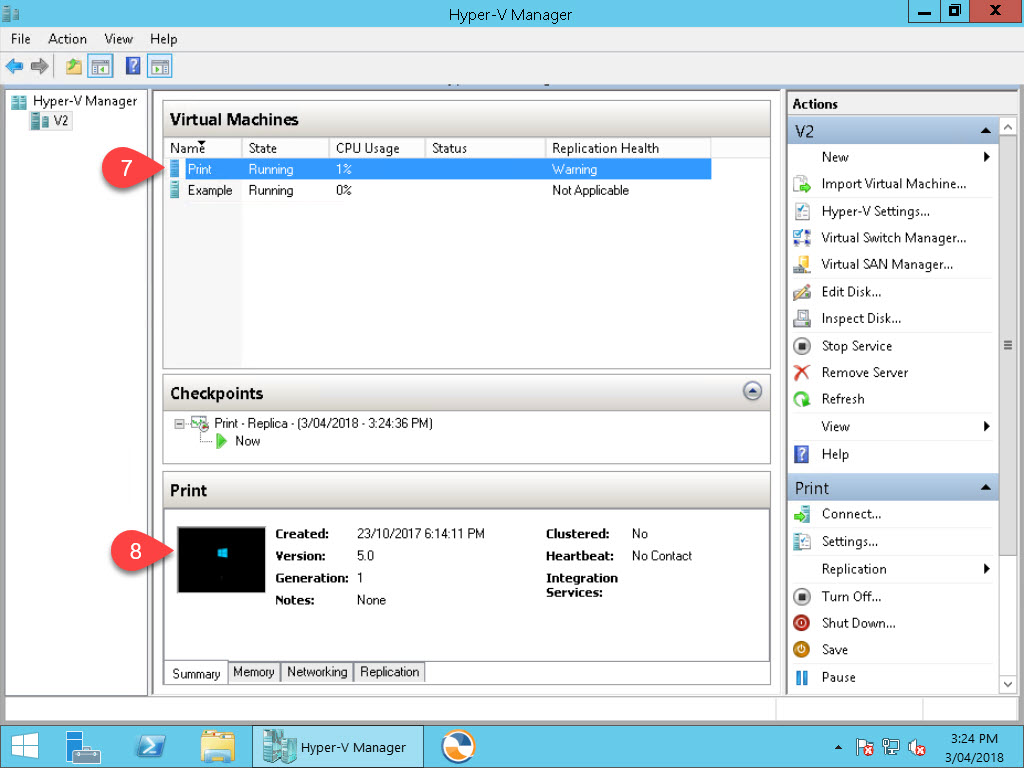 Some final clean-up needs to be done as soon as possible. As you can see there is now a warning in the replication, because its waiting for the issue to be resolved and the replication to be setup again in reverse (see 9 below). Also there is a replica snapshot/checkpoint (see 10 below) which should be resolved as soon as possible to ensure that backups contain the current and correct data. However, your server should be up and running and this entire process should take less than 15 minutes.

This post has been provided for the benefit of digitalwelcomemat IT customers.
Treat this information as informative only and do not take actions or make decisions on the basis of the information contained here. All IT decisions and actions should be made after consultation with your chosen IT professional taking into account all the of the relevant factors.

digitalwelcomemat now has a blog!

Subscribe for the news as it happens, call me for support on 0404 493 770 or access my remote support solution here: http://help.digitalwelcomemat.com/

Digitalwelcomemat provides IT consultancy and services for business customers on the NSW Central Coast in Australia.